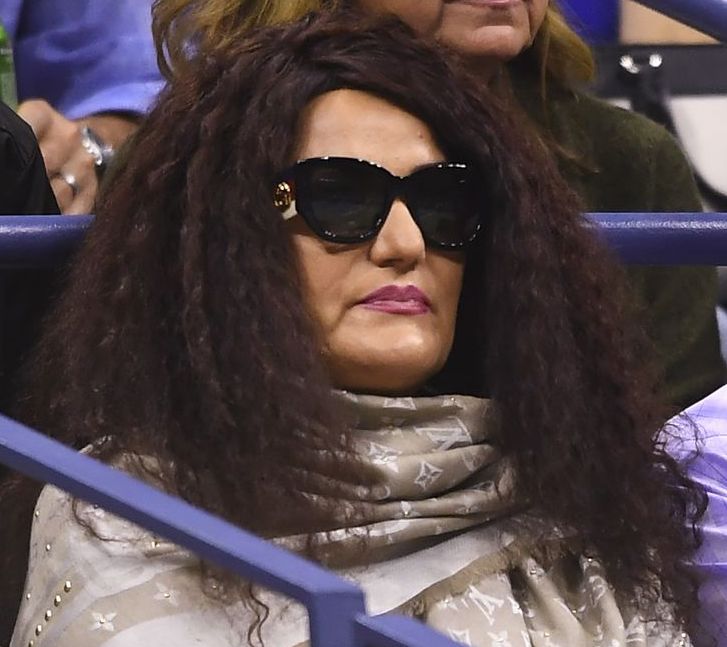 
This weekend, 19-year-old Bianca Andreescu became the first Canadian to win a grand slam title, beating Serena Williams, who was in hot pursuit of an astounding 24th title. And while Andreescu is worthy of all the praise being heaped on her and should probably keep the big trophy, the indisputable winner of the U.S. Open was her mother, Maria, who was serving courtside lewks for the gawds.

Going into the match, it was hard to know who to root for more: Andreescu, a teen underdog set to make history, or Williams, the GOAT of all GOATs. It was a real love-all situation. (Reports are coming in that that phrase does not mean what I think it means but unfortunately I don’t have time to read those reports right now.) One thing, however, was clear: every time a camera caught Maria Andreescu giving huge Moira Rose energy, I had no choice but to stan.


Hello? Brooklyn Nine-Nine? I’d like to gleefully report my own murder. The culprit? An ecru lace romper (maybe a dress, unclear; call the police sketch artist) underneath an enormous Louis Vuitton scarf. What’s that officer? Yes, the scarf looks like it’s big enough to have a picnic on and is worth more than my life, which, may I remind you, is now delightfully gone.

I love that this lewk is completed with what seems to have been Andreescu mere’s signature at the U.S. Open: huge sunglasses, nails the color of Leelo Dallas’s hair and hair that is so powerful I’d believe you if you told me it was the fifth element. This is 100 percent me as a parent sitting in the sun and serving whilst watching my child. You say sports game, I hear fashion show. You’re not going to catch me out here getting read to filth by Pray Tell from Pose because I didn’t bring my A-game to a Little League championship. No ma’am. Category is “my daughter may have come to play, but I didn’t.” (Note to my children: my preference would be that you become Broadway stars and win one fewer Tonys than Audra McDonald will eventually win, but the U.S. Open is also a fine option.)

On another day Mother Andreescu, who has an MBA, is chief compliance officer at an investment firm, and is cordially invited to slap me across the face any time if she wants, rocked a brightly colored patterned blouse with the word QUEEN written on the neck. Can you say accurate?!

And the accessory du jour was a tiny cute dog named Coco. How is she real? Are we totally certain that this isn’t Angelica Houston filming a new Ryan Murphy series that I will definitely watch every minute of?

Here’s how totally and completely Maria Andreescu captured my heart: below there is a photo that includes Alexis Ohanian, Meghan Markle, Venus Williams, and Anna Wintour and I am paying it dust right now in favor of talking to you about an icon who is giving you “Maya Rudolph in a movie about a very rich woman in witness protection.”

I will never get over how absolutely stressed everyone always looks in tennis photos. If you handed me a photo of celebrities in the stands watching the U.S. Open and you told me they were a jury on a high profile trial, I’d believe you. They got dressed up in fancy clothes to sit in the heat and deliberate about the verdict in the Lori Loughlin trial. This is extreme. That said, if I was ever on trial, I would want to see Maria Andreescu in the jury box wearing huge sunglasses and holding a puppy. This is justice.

You will be delighted to know that Andreescu also has an Instagram, which is adorably devoted to her daughter but does include its fair share of serves, most of which include huge sunglasses.

Is it too much to say that I want to move to Canada immediately, join the Mounties, and commit my life to protecting Maria Andreescu at all cost (and also every once in a while winking at Justin Trudeau while he’s on a jog)? This is the level of my adoration to this absolutely perfect person. New York Fashion Week may be only halfway finished but technically it was over the minute Maria Andreescu swanned into the Billie Jean King Center, sat down in her seat in a high fashion ensemble, and held court. Who can compete?