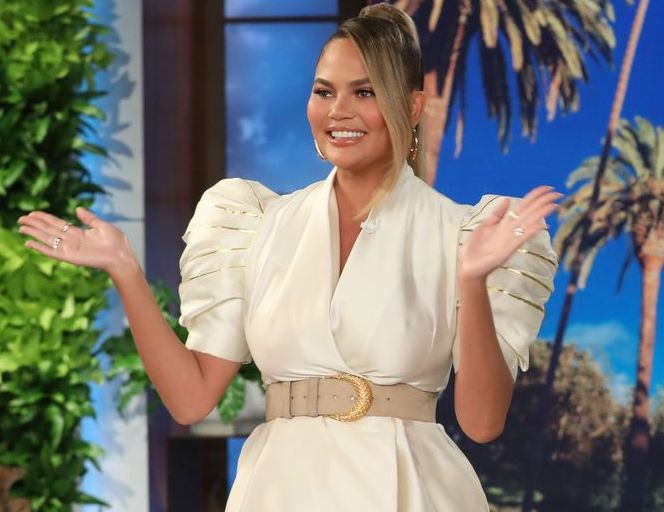 
Chrissy Teigen spoke to Ellen DeGeneres about the immediate aftermath of President Donald Trump tweeting about her and John Legend: where they were, how she felt, and what their process was figuring out the viral replies they’d tweet out to Trump.

Trump, for context, wrote in a Twitter rant about MSNBC’s town hall on the state of the criminal justice system that “musician @johnlegend, and his filthy mouthed wife, are talking now about how great it is—but I didn’t see them around when we needed help getting it passed.”

Teigen replied, “lol what a pussy ass bitch. tagged everyone but me. an honor, mister president.”

Legend replied, “Imagine being president of a whole country and spending your Sunday night hate-watching MSNBC hoping somebody–ANYBODY–will praise you. Melania, please praise this man. He needs you.”

But when the Trump tweet first dropped, Teigen was angry and shocked. “It was a weird feeling,” Teigen told DeGeneres. “I was really angry. I think my eyes filled up with water just at the shock of it. That I can’t believe this really happened to me right now. He just goes on these rants and—usually very late at night for him—you just wait for him to say something but you don’t think it’s going to be you. And then, yeah.”

Teigen said her phone started blowing up when Trump first dropped the tweet. “I just got all these phone alerts…And I was like, what? Something’s happening. So I go on Twitter to see it, but I’m still blocked so I have no idea what he said…so someone had to send me screenshots. And it was—my heart stopped because at that moment, you know that you’re about to get the wildest group of people ever.”

Teigen explained to the audience why it happened: “John did a story on MSNBC about criminal justice reform so he was a part of that interview. I was not a part of it at all,” she pointed out. “And then Donald for some reason thought that John was taking all the credit for it and me, and I didn’t even know he was filming this thing. Honestly, I didn’t know anything about it. So he just went in: He called John a ‘boring musician and his filthy-mouthed wife.’ Which, those two things are true. John is boring. I do have a filthy mouth. But when it’s you, when the card lands on you that day, it’s like oh crap because your whole night is ruined. We spent the entire rest of the night just sitting just like this next to each other, handing each other our phone. ‘Should I say this?’ ‘Should I say this?’ ‘No.’ ‘Should I say this?’ ‘No, it has to be funnier. No, because we’re mad, yeah, we’re mad.’ It just went on all night.’”