Aaron Hernandez: how did a $40m NFL star become a convicted killer? 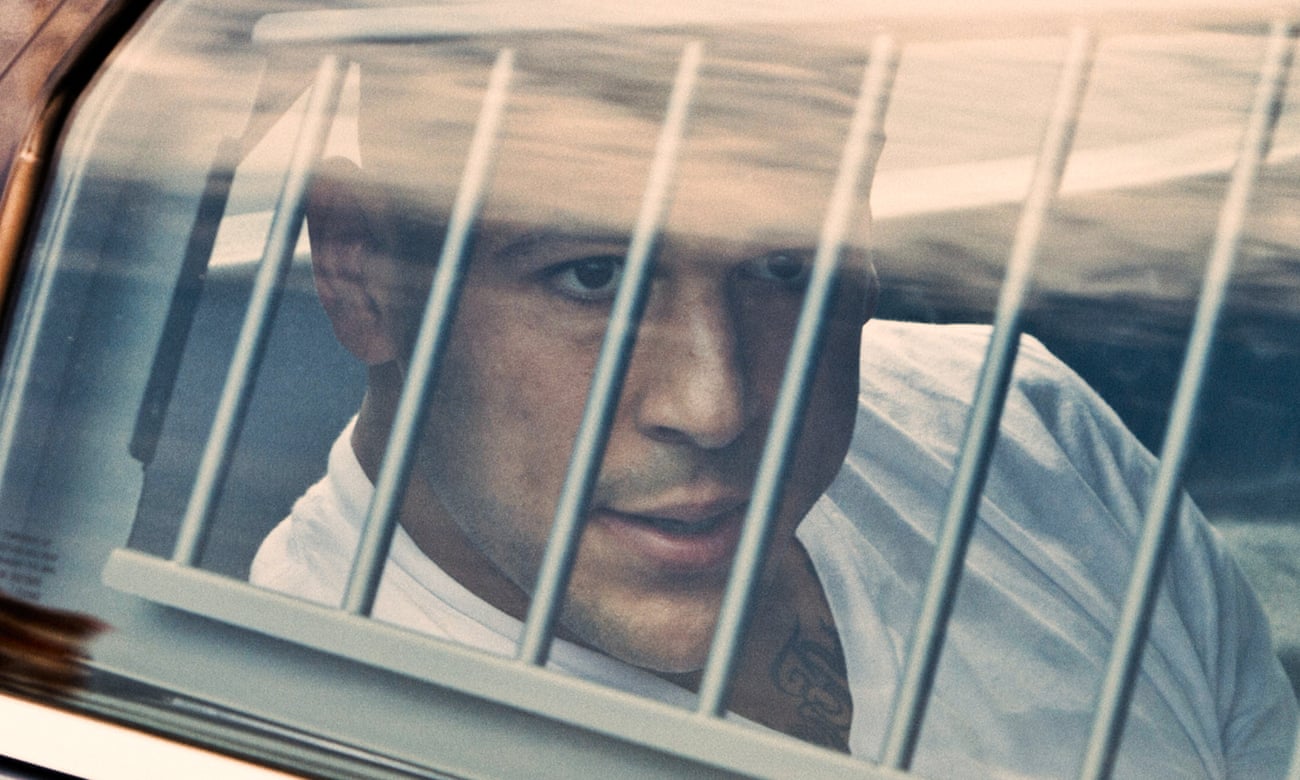 Even by the standards of America’s obsession with stories of spectacular falls from grace, the trajectory of Aaron Hernandez, a star New England Patriots football player turned convicted murderer, was particularly steep and unusually compelling – a senseless, horrific collapse unfolding in real time.

Three years before “fake news” became an ominous catch-all, Hernandez’s summer 2013 arrest for the murder of Odin Lloyd at his mansion in North Attleborough, Massachusetts – a news frenzy scene replayed in the first minutes of Netflix’s new series Killer Inside: The Mind of Aaron Hernandez – seemed to be just that: unreal. The facts of the case – a brutal execution-style murder of his fiancee’s sister’s boyfriend at a gravel pit down the street from his house – were irreconcilable with the image of an all-American sports figure. Hernandez, then 23, had just signed a $40m contract with one of the most successful sports organizations in the US, lived with his fiancee and baby daughter, and performed seamless feats of athleticism under the national spotlight every Sunday.

But investigators soon uncovered a strange, violent shadow to the amiable football star: evidence he was responsible for an unsolved 2012 drive-by shooting in downtown Boston of two men, Daniel Jorge Correia de Abreu and Safiro Teixeira Furtado, who allegedly spilled a drink on Hernandez at a club by accident; violent outbursts from his time on the national championship team at the University of Florida, swept under the rug; a former friend who testified Hernandez shot him in the face and left him for dead in a parking lot.

Killer Inside: The Mind of Aaron Hernandez, now available on Netflix, attempts to sew together his double life into a single, coherent narrative, or at least a more contextualized one. The three-part docuseries offers the most comprehensive visual account yet of the Hernandez story, which has inspired by now a library of content, from day-by-day reports at his two trials (he was acquitted of the drive-by in 2017 with the help of the celebrity attorney Jose Baez), to the Boston Globe’s critically acclaimed podcast Gladiator, which, like the series, examines Hernandez’s larger environment and personal history – his sexuality, abusive upbringing, massive celebrity and postmortem diagnosis of chronic traumatic encephalopathy (CTE), a degenerative brain disease associated with repeated head injuries. (Hernandez killed himself in prison in April 2017.)

Director Geno McDermott began working on what at the time was a documentary feature on Hernandez in January 2017, before the start of his second trial. His partners on the project, journalists Kevin Armstrong and Dan Wetzel, both executive producers, had been developing a book on Hernandez since his first trial in 2015; Armstrong had been covering Hernandez since his high school days in Bristol, Connecticut. Their initial film, My Perfect World: The Aaron Hernandez Story, premiered at Doc NYC in 2018. But as fascination with the Hernandez case continued and more information emerged – specifically, confirmation of Hernandez’s closeted sexuality (he publicly dated women and privately, according to several participants in the series, had sex with men) and of CTE – McDermott and his team realized the story demanded a longer series. “I always expected this to end,” he said of the Hernandez saga. “And it just never ends. There’s constantly new developments, new books coming out, new people talking.”

Killer Inside attempts, over the course of three hour-long episodes, to untangle the many supercharged cultural threads undergirding Hernandez’s life, among them: the death of his domineering and allegedly abusive father when he was 16, the pressure to conform to a hypermasculine sports ideal, the double life of closeted sexuality, the allure of guns as an assertion of masculinity, the unwavering fanaticism of college football, the impunity permitted by fame, the prioritization of winning football games over literally anything else. Perhaps, it hopes, there’s clear “why” at the center of all this.

It’s a futile project, as the production team acknowledges both in and outside the series; Hernandez is no longer around to offer insight. His closest confidante, cousin Tanya Singleton, died of breast cancer in 2015. The production team reached out to “hundreds” of people who could speak to Hernandez’s life, according to McDermott, but his mother (with whom Hernandez was mostly estranged), brother and fiancee all declined to participate in the series.

Instead, the series relies on testimony from “a tapestry of perspectives … from every walk of life in which Aaron was involved”, said McDermott, including: Dennis SanSoucie, Hernandez’s high school quarterback and secret lover for much of his adolescence, and his father, who was unaware of his son’s relationship with the star tight end until after Hernandez’s death; former Patriots offensive tackle Ryan O’Callaghan, who speaks to the pressure to stay silent as a gay man in football; Wetzel, Armstrong and other journalists covering the case; and friends of Lloyd, who provide a much-needed portrait of the lives Hernandez ended and the loved ones they left behind.

In lieu of Hernandez’s own explanation, the series also works in long excerpts of his phone calls from prison to his mother, old teammates, Singleton, his fiancee and others. The audio clips, culled from hundreds of calls the production team obtained through Foia (Freedom of Information Act) requests, “give everyone a look at who Aaron was”, said McDermott. Hernandez is at turns despairing and jovial, weirdly at ease in his jail life, seemingly unconcerned with his crimes.

Wetzel doesn’t have a single answer as to what went horribly wrong with Hernandez. “I think it was a perfect cocktail of problems,” he said. “And there were many, many times when this could have gotten a walk back or he could’ve gotten off the rails. He just never had the help or just made terrible decisions.”

Over six-plus years of covering Hernandez, however, “you certainly saw a guy who throughout his life projected outwardly what he thought people wanted to see, whether it’s buying the big house or having a daughter, having a fiancee, the tattoos, whatever it was”, said Wetzel. “It’s almost like he spent his whole life searching for where he belonged and never found it.”

McDermott said he hopes people walk away from the series, first and foremost, with a deeper understanding of the context around Hernandez’s descent into violence, as well as perspective to continue conversations about sexuality in sports-dominated settings and the damage of CTE. “We’re presenting what’s there, so it’s not like we’re offering an opinion,” he said, “but we do want people to have conversations about it.”

The series is ultimately unsuccessful in explaining what is probably unexplainable: what turned Hernandez from a popular jock into a cold-blooded killer. But the hope, according to McDermott and Wetzel, is to illuminate the forces in Hernandez’s life enough to make the context clearer and, perhaps, instructive for someone else. “You’re never going to know why. The best we could do was put out the facts of the story and the viewer is going to decide what they think is why,” said McDermott. “It’s important to keep these conversations going and for people to know the whole story.”

… we’re asking readers, like you, to make a new year contribution in support of the Guardian’s open, independent journalism. This has been a turbulent decade across the world – protest, populism, mass migration and the escalating climate crisis. The Guardian has been in every corner of the globe, reporting with tenacity, rigour and authority on the most critical events of our lifetimes. At a time when factual information is both scarcer and more essential than ever, we believe that each of us deserves access to accurate reporting with integrity at its heart.

You’ve read 14 articles in the last four months. More people than ever before are reading and supporting our journalism, in more than 180 countries around the world. And this is only possible because we made a different choice: to keep our reporting open for all, regardless of where they live or what they can afford to pay.

We have upheld our editorial independence in the face of the disintegration of traditional media – with social platforms giving rise to misinformation, the seemingly unstoppable rise of big tech and independent voices being squashed by commercial ownership. The Guardian’s independence means we can set our own agenda and voice our own opinions. Our journalism is free from commercial and political bias – never influenced by billionaire owners or shareholders. This makes us different. It means we can challenge the powerful without fear and give a voice to those less heard.

None of this would have been attainable without our readers’ generosity – your financial support has meant we can keep investigating, disentangling and interrogating. It has protected our independence, which has never been so critical. We are so grateful.

As we enter a new decade, we need your support so we can keep delivering quality journalism that’s open and independent. And that is here for the long term. Every reader contribution, however big or small, is so valuable. Support The Guardian from as little as $1 – and it only takes a minute. Thank you.